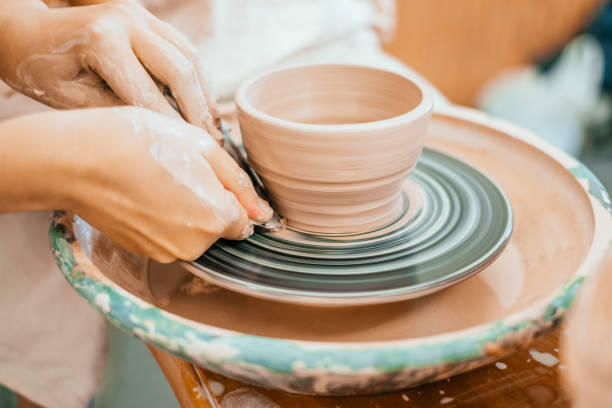 Pottery is clay that has been moulded, dried, and fired into a vessel or ornamental item, generally with a glaze or finish. Clay is a natural substance excavated from the soil that has decomposed over millions of years from rock inside the planet's crust. When water erodes the rock, it breaks it down and dumps the fragments. It's crucial to understand that a clay body is not the same as clay. Clay bodies are clay that has been combined with additives that give the clay distinct qualities when handled and burnt; hence, pottery is formed from a combination of clay and other materials rather than raw clay.

The potter may shape his creation in a variety of ways. Clay may be molded by hand or on a potter's wheel, jiggered (a tool that duplicates the shape of a master model onto a production piece), poured into a mold and cured, or cut or stamped into squares or slabs. The techniques used to make pottery are as diverse as the artists who make it.

Pottery must be burned at a high enough temperature to develop the clay, which means the object must be hardened in order to contain water. The addition of liquid glaze to the surface of the unfired pot (which may be painted on or dipped in the glaze) modifies the chemical makeup and fuses to the surface of the fired pot is an important aspect of this firing. The pottery is thus referred to be vitreous, which means it can contain water.

For millions of years, potters have been creating containers out of clay bodies. The burning of clay pots was not long behind when nomadic man settled down and found fire. The earliest pottery may have been pinch pots, which were created from clay balls into which fingers or thumbs were put to produce the hole. Coil pots, which are made by blending lengthy coils of clay together, were not far behind. These early pots were delicate and porous because they were burnt at low temperatures. Before firing, ancient potters partly handled this problem by burnishing the surfaces with a rock or hard wood. These flames turned the low-temperature burned pots black. Incisions or tool insertions into soft clay were often used for decoration. Things that might be utilized for utilitarian reasons, as well as objects that symbolized their fertility gods, were made by early potters.

As early as 5000 B.C., the civilizations of ancient Egypt and the Middle East used clay for construction and household purposes. The ancient Egyptians were making pottery on a considerably bigger scale around 4000 B.C. They used finer clays and burnt the pieces at far higher temperatures in early kilns that kept the pots out of direct fire, preventing them from being blackened. Clay bricks were also employed as a construction material. By 3500 B.C., the ancient Chinese had developed black pottery with circular bases and plaited ornamentation. Closer to 1000 B.C., the Chinese produced more complicated glazes and employed the potter's wheel. Their pottery was often used in burial rituals. The Greeks started tossing pots on wheels and producing magnificent shapes in the first century B.C. Pre-Columbian peoples, ancient Iberians, ancient Romans (who molded clay with raised design), and ancient Japanese peoples all made exquisite pottery for both home and sacred usage.

European potters typically sold limited amounts of finished ceramics at markets or via merchants until the mid-eighteenth century. They brought more items to market if they intended to sell more. Instead of delivering completed items to the customer, British industrial potters experimented with new body types, refined glazes, and accepted orders for objects created in factories. Many other potters followed suit in the late eighteenth century, experimenting with a variety of different bodies and glazes. Molds were utilized to produce large numbers of uniform goods, allowing the buyer to feel confident in the piece's appearance. 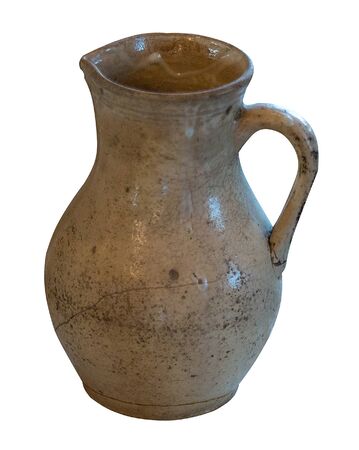 Materials In The Raw

Clay is made up of 40 percent aluminum oxide, 46 percent silicon oxide, and 14 percent water. Its major component is kaolinite. Clays are divided into two categories: main and secondary. Primary clay is found in the same location as the rock from which it is generated; it has not been carried by water or glacier, and hence has not combined with other sedimentary materials. Primary clay is solid, hefty, and unadulterated. Lighter material is transported further in water and deposited as secondary or sedimentary clay. Secondary clay is a sediment combination that is finer and lighter than main clay. The clay takes on diverse qualities depending on the additions used. Clay is delivered to a production potter in one of two forms: as a powder that must be mixed with water, or as a liquid that has already been mixed with water. Large manufacturers buy the clays as dry materials in large amounts and make up the clay batch as required each day.

This magnificent, sturdy stoneware teapot is by Josiah Wedgwood and Co., of Staffordshire, England, possibly the most well-known of nineteenth-century British ceramic enterprises. Because of the growing significance of "tea" and its ceremonial, teapots and related cups were increasingly popular during the mid-1700s. The teapot and cup sets were therefore a staple of porters in the eighteenth century.

Josiah Wedgwood was not pleased with supplying ceramics in a random manner. He was well aware that there was a sizable demand for high-quality, appealing pottery, and he would do all in his power to standardize the product and invent some new items that people just had to have. He was one of the first potters to sell his works in advance through orders, resulting in a "stock" or "sample" product. Because his goods had to be consistent, he created glazes that would provide consistent outcomes and split the labor process into many parts so that one worker would not have a significant influence on the final product. The work of the modeller and artist who created the prototype forms and designs for Wedgwood was very significant to Wedgwood. Wedgwood recognized that these painters could create patterns for fresh pottery that seemed to be ancient, and his neo-classicol pieces were his business's backbone for many years.

Glazes are constructed comprised of ingredients that fuse together during the fire process to make the pot vitreous, or liquid-proof. (A vitreous pot is one with a water absorption rate of less than 0.5 percent, according to ceramics experts.) Glazes must have three ingredients: silica, the vitrifying element (which transforms raw pottery into a glasslike state)—found in powdered and calcined flint and quartz; flux, which fuses the glaze to the clay; and refractory material, which hardens and stabilizes the glaze. Antimony (yellows), copper (green, turquoise, or red), cobalt (black), chrome (greens), iron, nickel, vanadium, and other metallic oxides are used to create color. Production potters often acquire glazes in dry form. The glazes are weighed and mixed with water in a ball mill. The glaze is blended and ground in the ball mill, which reduces the size of the natural particles in the glaze.

Art directors work at pottery companies, and their task is to come up with marketable wares for the firm. In most cases, the art director develops or generates a fresh creativity concept in collaboration with marketers. (Interestingly, many small pottery businesses are replicating previous popular shapes from decades before, like as vividly colored Fiesta Ware, so fresh design isn't always essential or desired.) After that, the art director collaborates with a clay modeler, who creates an original version of the invention according to the art director's instructions. If the form is considered suitable for production, the mold maker creates a plaster master for the jiggering machine (which effectively transfers a master shape to a production piece) or a hollow into which clay is poured to create a production piece.

The company's defined criteria are applied to all raw materials. The elements needed by the product and requested by the firm must be present in clays. Glazes must be as pure as possible, and they are tested for shade, viscosity, gravity, and other factors. The temperature of the kiln must be closely monitored using heat cones and thermocouples, among other things. And every person engaged in the manufacturing process utilizes their eyes to keep an eye on substandard items.

The manufacture of pottery does not produce any detrimental by-products. Re-mixing and re-using clay leftovers and defective pieces from the jiggering machine or slip casting is possible. The Food and Drug Administration (FDA) requires that glazes be lead-free, and glazes are tested in-house to ensure that they do not include cadmium or lead. In their raw condition, all glazes may be handled by the human hand and are not dangerous.