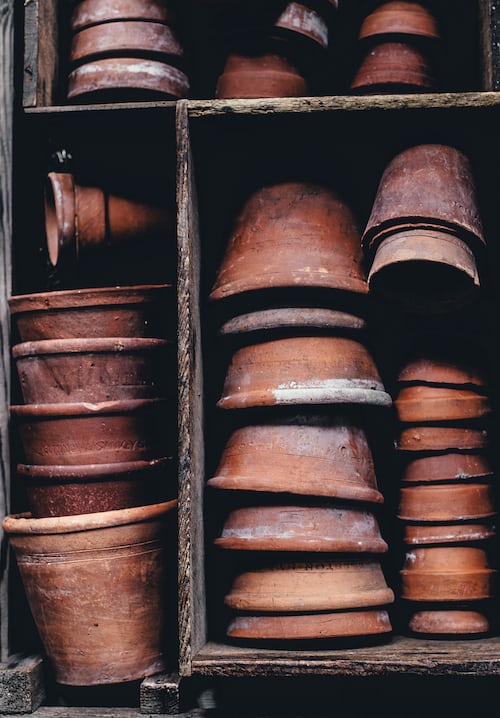 Founded in 1948 by Edith Heath and relaunched by Catherine Bailey and Robin Petravic in 2003, Sausalito's Heath Ceramics is the place to go for high-quality ceramics.

We selected a few additional Bay Area-based ceramicists whose small-batch bowls, vases, and wall art deserve equal attention in the wake of Heath's beauty and legacy.

That said, not all of these artists will follow in the footsteps of Heath's journey from potter to potter-turned-tableware-maker. They've all left a path of distinct viewpoints and attention to detail, though.

A few Bay Area ceramicists are worth keeping an eye on, especially during the Christmas season. There are several brick-and-mortar stores where they sell ceramics.

Colleen Hennessey, a ceramicist based in Mendocino, worked as a chef for 15 years at Los Angeles restaurants (Lucques, Campanile, Canelé) before turning her attention to ceramics for the kitchen. Artworks by her have appeared in several publications and magazines, as well as prominent eateries in the area.

This San Francisco-based French designer isn't content with just creating decorative bowls and vases. Conceptual creations range from large-scale sculptures to quirky flower vases by this artist. Currently one of the most fascinating ceramic voices to be found anywhere in the world.

Mel Rice went to San Francisco from New York after completing a degree in baking and pastry arts there. After eight years of studying and working in the pottery workshop at San Francisco City College, she launched her own line of ceramics inspired by the ocean's sights, smells, and sounds. Her compositions are sparse and uncluttered. In some cases, they're downright risqué. Rice's art may be obtained online or at a tiny micro store on Valencia Street, in front of Amnesia, where he uses techniques like spatter and Mishima (a Korean potter's procedure of coating objects in celadons).

Another foodie has been added to the ranks. High-fired stoneware is a recurrent theme in Sarah Kersten's work. As Kersten explains, "all of my ideas answer to actual demands, wants that I've experienced in my own kitchen, or requests that friends and chefs I've worked with have told me,". A piece can take as long as a year for me to get it just perfect since I take my time, focusing on the shape, size, and overall feel of a piece. Check out her splatterware pieces, which will liven up any space that's been reduced to a state of minimalist overkill.

Ceramist Cuong Ta's art features patterns and geometric designs inspired by his time as a math teacher. "I continue to be compelled to investigate the interaction between boundary and flow, the tension between positive and negative space," explains Ta. A wide range of sizes and deeper colors are included in his work.

Sara Paloma began working with clay in college as a prerequisite for an art education degree, drawing inspiration from architecture, geology, beachcombing, and industrial design. It was during that course that she discovered a passion for large pottery that has grown into a full-time job. Paloma's has made stoneware containers for galleries and design stores around the country since migrating to the Bay Area in 2003. One of their most notable projects was a 2013 collection of vases and bowls for Restoration Hardware.

Wabisabi (the acceptance of imperfection and transience) is one of Rae Dunn's inspirations, and her art focuses on the beauty of imperfection. Like this "Salt of the Earth" salt cellar and her animated bird dish, Dunn's ceramics are known for their clever use of text and aviary-themed designs that precede the Portlandia sketch.

MM Clay is a business established by ceramic artist Mary Mar Keenan in Hayes Valley that specializes in handcrafted dinnerware with a focus on textures, particularly grooves and indentations. Her most recent project was a line for Stuart Brioza's The Progress, the James Beard Award-winning chef's restaurant. Tableware designed by MM Clay has appeared in Food and Wine, Remodelista, and Saveur as well as other prestigious restaurants (A16, WildHark, and Octavia, among others).

In spite of its deceptive simplicity, Gerhard Ceramics produces some of the world's most exquisite and attractive objects. These handcrafted sculptures are commonly available in white or black, however their matte and gloss glazed coatings include slight flaws. In Gerhard's words, "these variances and faults are treasured and welcomed."

"To illustrate the coherence of beauty," Sasinun Kladpetch experiments with materials such as clay, dirt, plaster, concrete, and plants. Her works are meant to be seen, not touched. But these are some fantastical visions. It's breathtaking.

Sarah Duyer's art is full of horrible comedy and wit, from glazed mugs that resemble like desert landscapes to a teapot that sprouts crab claws. It's a wide spectrum of items, from basic and elegant dinnerware to grotesque ring plates, that she has created. Her porcelain coffin pins, which read "Rest In Pizza," are particularly charming.

Ceramic cups organized by color on shelves and drawers

Dion\sOakland-based One of the most popular coffee shops in San Francisco is owned by a married couple who met in graduate school at California College of the Arts: Jay and Rie Dion. SightGlass, FourBarrel Coffee, and The Mill have all showcased their work since they began in 2011. As part of their partnership with Unionmade, they even designed a set of glazed, blue-hued tumblers.