The massive and sustained 2019 coronavirus disease (COVID-19) outbreak caused by the severe acute respiratory syndrome coronavirus 2 (SARS-CoV-2) has resulted in a staggering number of over 549,000 deaths in the United States. among over 30 million cases. A new preprint research report posted on the medRxiv * server explains the factors related to the chances of testing positive for this virus.

The importance of testing

The spread of the virus is closely related to the ability to test its presence and separate infectious individuals. Therefore, testing capacity and reliability, as well as accessibility, were critical in monitoring the outbreak and treating patients.

This requires a better understanding of the implications for test results as this can affect testing strategies and affect the weight of a positive test result. COVID-19 tests include both PCR tests (Polymerase Chain Reaction) for the viral nucleic acid or rapid antigen tests for the detection of viral antigens and antibody tests for specific SARS-CoV-2 antibodies.

The current study used data from electronic health records (EHRs) in the United States to examine the characteristics of patients who underwent SARS-CoV-2 tests in clinical practice, as well as trends in tests and positivity rates over time. Third, the researchers are trying to examine the degree of correspondence between virus and antibody tests.

This study included data on over 800,000 patients who had been tested for the infection in the real-life setting of the pandemic.

Virus tests had a positivity rate of 9% and antibody tests showed a positivity of 12%. Overall, there was a 90% to 93% agreement between antibody and virus test results in those who received both.

The positivity rates showed an inverse correlation with the number of people tested in a group and declined over time regardless of region or race.

Belonging to these ethnic groups increased the likelihood of viral positivity two to three times. Populations in the northeastern United States, the presence of diabetes, obesity, and dementia were also associated with higher test positivity.

Number of patients and positivity by cohort, index date, region and race / ethnicity

Test results in children seem a little less predictable and show larger discrepancies between virus and antibody tests, with antibody tests having a higher rate of positivity in this group. The chances of being positive were 40% less than young adults up to age 34 when both had the same number of symptoms.

The presence of anosmia / dysgeusia was associated with a seven-fold risk of testing positive. At the same time, it was six and four times the case of acute respiratory distress when the patient had pneumonia. Smaller increases were seen in chest infections, loss of appetite, and cough.

As measured by a week of study, the Northeast region showed a high initial rate of positive testing, which decreased over time, in contrast to the west, which had the highest rates of positive testing in the final week of the study. Higher chances of positivity over time were also seen in the American South. 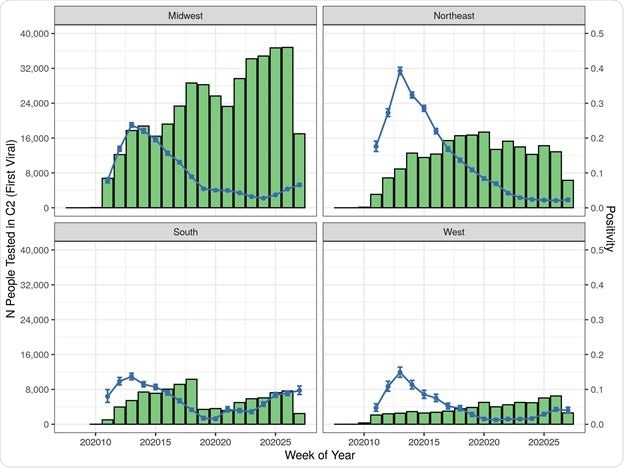 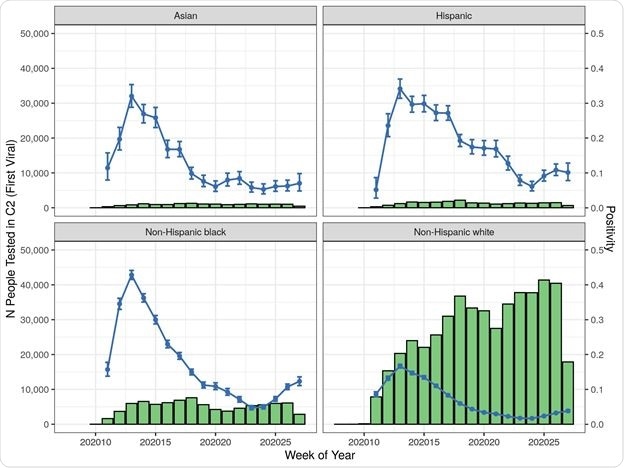 Antibody tests were positive in 12% and were twice as positive in children and children with inadequate insurance (seven times as likely as in those with commercial insurance plans). The positivity rate increased 2.5 to 3 times for blacks or Hispanics.

About 90% of those who received a virus test followed by an antibody test on the same day showed consistent results. Discordant results occurred more frequently if the virus test was positive and the antibody test was carried out within the following two weeks. 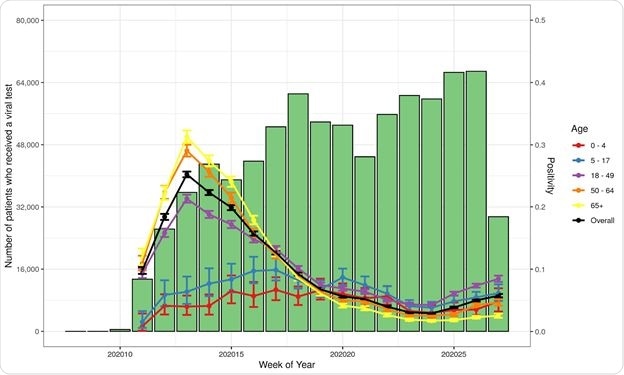 What are the effects?

The results show that minority populations are tested less than the general population, even though their test positivity (PR) rates are higher. People with a higher index of the underlying disease, as measured by the Charlson Comorbidity Index, had lower positivity rates.

Increased test positivity is also associated with inadequate health insurance. These results are consistent with the existence of social and economic inequalities in the United States. The test positivity rates are also shaped by the fact that different groups are exposed to different degrees of exposure to the virus and have different access options to tests.

Comparing the results of virus and antibody tests shows that they are largely in agreement. To qualify for this, the interval between a virus test and an antibody test should be at least two weeks so that highly concordant results are achieved.

This interval likely reflects the time required for seroconversion. The interesting thing is the high level of agreement between these tests as the tests are very different. This is a welcome finding as the test results available in the various EHRs cannot be directly assessed in terms of their sensitivity or specificity.

The rate of positivity in children is more dependent on the type of test, with antibody tests being more likely to be positive. The underlying factors here may include the clinical status at the time of the test, the severity of the disease, and the immune response. This reflects previous national surveillance data.

The EHR data show the importance of chemosensory dysfunction as a predictor of test positivity as well as fever, cough, and chest infections. At the same time, some symptoms seem to have little correlation with test positivity. This could be a wrong association, possibly due to low test rates in patients at high risk of infection.

Alternatively it could be that the symptoms are too unspecific and thus dilute the test positivity. Or these symptoms can appear early in the disease when the tests are less sensitive.

As with previous studies, test positivity is lower in people at high risk of infection due to several underlying chronic diseases. This may seem counter-intuitive, but it is due to self-protective behavior or an increased tendency to test such groups.

In this group, however, obesity, diabetes, and dementia continue to show strong positive associations with serious illnesses.

medRxiv publishes preliminary scientific reports that are not peer-reviewed and therefore should not be considered conclusive, guide clinical practice / health-related behavior, or treated as established information.