India has had over 10 million cases of infection with the severe acute respiratory syndrome coronavirus 2 (SARS-CoV-2), which causes coronavirus disease 2019 (COVID-19). However, the data on the incidence of asymptomatic infections and antibody persistence has been lacking. A large new study posted on the preprint server medRxiv* describes the seropositivity rate to this virus, as well as the persistence of antibodies over time, both neutralizing and others.

The team of 136 scientists drew their data from a pan-India cohort (Phenome-India), comprising employees at the Council of Scientific and Industrial Research, India (CSIR) and their families across the country. There were altogether roughly 10,000 individuals who were assessed over six months. This multicenter cohort study draws on a wide range of ethnic groups, cultures, and occupations, as the CSIR is made up of over 40 laboratories and centers all over India.

The current phase I study aimed to provide preliminary information about the pattern of spread of infection in India, as well as the way the characteristics of the virus change. 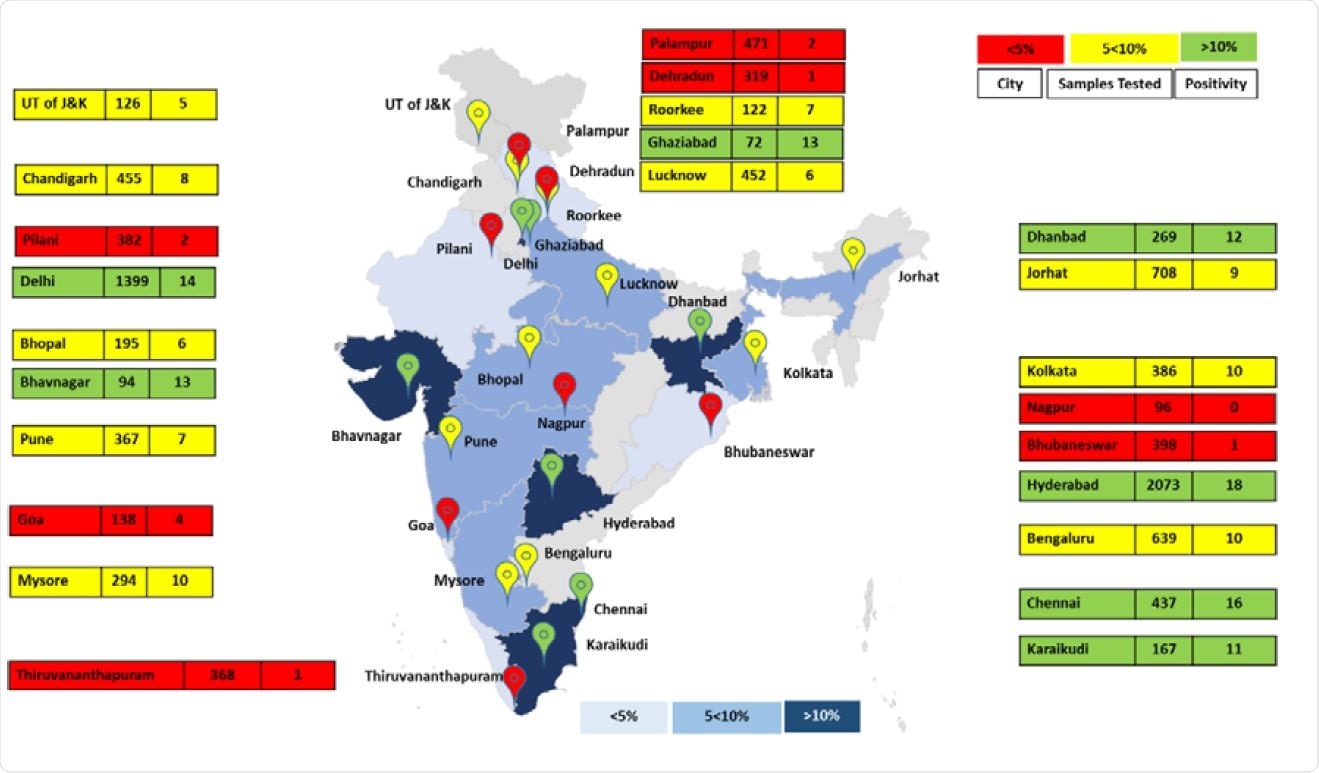 City wise total samples collected and seropositivity. (For states with multiple cities, city seropositivity was averaged except for the state of Maharshtra as Nagpur had seropositivity of zero. India map may not be to scale and is for representation purposes only. Sero-positivity is rounded off)

The investigators used the anti-nucleocapsid antibody for their evaluation, since this antigen is more abundant. However, a neutralizing response is better assessed using the SARS-CoV-2 spike protein since the host cell receptor, the angiotensin-converting enzyme 2 (ACE2), binds to this viral protein at the receptor-binding domain (RBD).

The study shows the prevalence of the anti-SARS-CoV2 N antibody in 10% of the subjects. The correlation of seroprevalence with population density appears to suggest that the latter is an important factor in the spread of infection.

About 95% of individuals with seropositivity also had neutralizing activity.

The seroprevalence was inversely correlated with the trend of new cases, with higher seropositivity rates predicting a lower incidence. The researchers were unable to identify any risk factors for the infection in this nation-wide sample, except for sex. Predictably, 72% of the study participants were male, despite women making up ~49% of the Indian population. Only about 9,000 people noted their sex on the information sheet, of which ~10% and 8% of males and females were seropositive. This was not considered to be significant, however.

The researchers found that seropositivity was high in big cities, although most of India showed low or moderate seropositivity. Again, only a quarter of the seropositive could recall any history of suggestive symptoms at all. The most commonly reported symptom was flu-like symptoms with fever, reported in half the individuals, while a quarter complained of anosmia or ageusia. Shortness of breath was reported in only ~3% of the symptomatic patients.

Non-smokers had 50% higher odds of being seropositive relative to the risk of the whole cohort. If only males were considered in the whole cohort group, the odds increased to almost 70%.

When classified as CSIR staff and outsourced staff, they found the seropositivity in the former category to be ~8%, but ~16% in the other category. Thus, outsourced staff had a higher risk of being infected, with 23% higher odds relative to the whole dataset and 275% higher odds among the female participants alone. The staff category comprises CSIR faculty, office staff, students, and family members. Outsourced staff includes security, housekeeping, and gardening staff.

Those who relied on public transport had a seroprevalence of ~16% vs. ~9% for those who used private vehicles. Thus, the odds for infection were ~20% lower in the latter category, 10% lower for males, and 17% lower for females.

The shape of the antibody curve

The researchers had ~350 samples at three months, of which the anti-nucleocapsid antibody titers in the positives remained steady or increased. The antibody titers to the N antibody waned to undetectable levels in only 1.4% at this point.

“This indicates that although there is an overall decline in both nucleocapsid antibody and neutralizing antibody levels at six months, in most cases they still are above the threshold value and could potentially confer protection from infection even at six months.”

What are the implications?

The researchers have provided a snapshot of the seroprevalence of SARS-CoV-2 infection across India. While the pandemic spread more or less unevenly until September 2020, it proliferated thereafter. The fact that users of public transport and outsourced staff among this study’s subjects showed higher seroprevalence might reflect the situation among the millions living in the towns and cities where these subjects live.

The migrant exodus is likely to have promoted the spread of the pandemic on an extensive scale since these migrants, like the outsourced workers in the current study, were likely to have the highest seroprevalence and to have used public transport. Thus, the pandemic probably spread from urban to rural India by September 2020.

Males were not more susceptible to the infection, nor was any age group found to be preferentially affected. The blood type O’s protective effect was confirmed, but further research is required to understand the mechanism of protection.

The stable neutralizing response at six months from entry into the study indicates that protection may last for this period, at least, beginning to wane after this point.

The researchers postulate, “SARS-CoV2 NC antigen, being similar to other coronaviruses, incites a stronger and long-lasting antibody production due to prior reactive cells, while, the RBD domain of the spike protein is a necessary target for the neutralization assay and possibly, being more unique, incites a weaker response.”

The seropositivity rate of this study indicates that over a hundred million people in India may have been infected by September 2020. Herd immunity is still far away in this country of over 1.36 billion. The vaccine rollout that is now beginning is being touted as a symbol of hope that the virus may yet be contained.

Most COVID-19 patients have neurological symptoms