To date, the COVID-19 pandemic has claimed over 2.5 million lives worldwide. The death rate (CFR) is an important parameter in COVID-19 mortality research and is defined as the ratio of the number of infected cases to the number of fatalities.

CFR serves as a quantitative metric for the severity or lethality of a COVID-19 infection. It can be a reference to compare with other infectious diseases like Ebola or Severe Acute Respiratory Syndrome (SARS). A critical application of CFR is to determine the number of infected cases by the death toll, as it is widely believed that the death toll is a relatively reliable figure.
CFR is also useful as a proxy for risk assessment.

It is important to understand the factors that contribute to the CFR in order to properly apply the CFR. While it is clear that COVID-19 mortality is closely related to pre-existing conditions or the patient’s health, it is not enough to understand CFR at the population or national level. COVID-19 mortality is often due to other conditions affecting a person’s lungs or heart, making it difficult to differentiate CFR at the population level. The observed CFR may be different for different populations, as the death toll can be affected by different methods of counting mortality in different locations, the difficulty in determining the exact cause of death in the presence of comorbidities, and also the lack of counts in reported mortality .

Although CFR has been used as a measure of infection severity, infection estimates, and risk assessment, there is a lack of understanding of various aspects of CFR. A better understanding of the CFR in terms of population parameters or covariates is important to understand the difference in CFR between different countries.

US researchers recently analyzed CFRs at two different times – July 6th during the first wave and December 28th during the second wave of the pandemic. Age and GDP were the population parameters that were of primary interest in this study, as it was found that there was a strong correlation between age, GDP and mortality in COVID19 cases. These two critical covariates have been used as a proxy for public health quality and abundance. Studies have shown that the CFR is high for the elderly while it is very low for younger people under the age of 30. The study will be published on the preprint server medRxiv *. 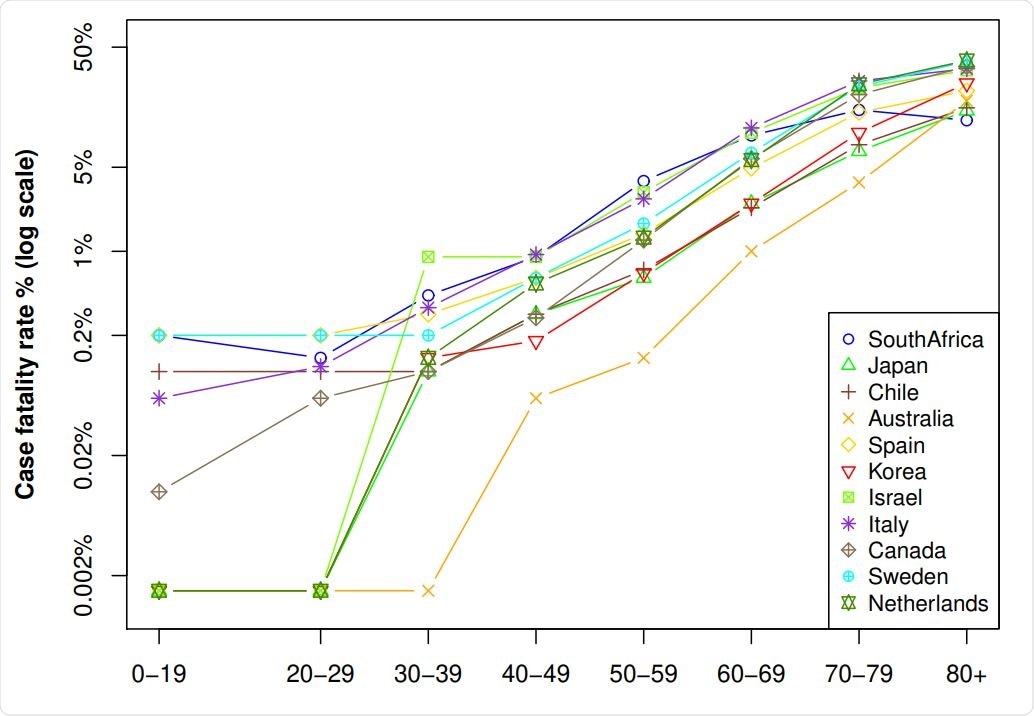 Protocol-scaled CFR by age group for selected countries as of July 6, 2020.

The study found exponential inequality in CFR by age group in a number of countries, selected primarily for data availability, and has been shown to be fairly evenly distributed around the world. The researchers conducted extensive exploratory data analysis, which led to some interesting results. They showed that there is a marked exponential age effect between different age groups, and this exponential index is almost invariable in different countries and at different times during the pandemic.

“One country that stands out is Singapore, which has an extremely low observed CFR due to its above-average age of the population.”

Analyzing the CFR for different countries, using age and GDP as proxy for the quality and abundance of health care, allowed researchers to understand the role of age and GDP in the different CFRs between countries, despite limitations in data accuracy. The results showed that the role of GDP and age was also slightly surprising. During the first wave, age was a more important factor than GDP, while its importance reversed during the second wave of the pandemic. According to the authors, this can be explained in part by the lag in quality and abundance in the public health field.

“The exponential age effect is largely unchangeable across different age groups, which is clearly shown in both data with almost identical estimated exponents.”

medRxiv publishes preliminary scientific reports that are not peer-reviewed and therefore should not be considered conclusive, guide clinical practice / health-related behavior, or treated as established information.